Polish – an ambiguous word? Also, find out more where to play We Are Screwed!

Welcome back to yet another episode of our We Are Screwed! development blog! If you are new to this blog, and want to catch up, check out the previous episodes:

In some industries, especially summer is the time of the year when everything is a bit laid-back – some call it the summer slump, the silly season, or they just say, “nah, it’s too hot to do this right now”. All perfect and legitimate reasons to get away from work, and recharge batteries. For us, summer is typically divided into two phases: Before Gamescom, and after Gamescom. Before Gamescom means we have to work hard on what we want to show there, after Gamescom typically means taking a deep breath before getting things ready for the next local event, the Game Dev Days Graz.

So after dealing with a lot of UI tasks and UI-related issues in the last sprint (see Episode #2), we actually wanted to finish implementing the boss for the first stage of the game, and then do some polish work to get a build ready for both Gamescom and showing it off to publishers and potential partners.

My original idea was to write a new dev blog post at the end of each sprint, but I have to admit, this time it didn’t work out. We wanted to do a one-week polish sprint which ended up becoming more chaotic than expected, as unforeseen events and delays hit us. When we realized this mid-sprint, we decided to still close this one-week clusterfuck of a sprint, and then continue with a two-week sprint dealing with all the leftovers that still need to be done to get a build ready for Gamescom. So this entry here covers those two sprints.

The goal of the last three weeks was to create a build of the game where the complete first stage is playable, which means content for 6 levels including the first boss fight. As of writing this, we are still not done. Why? Partially because we were caught up with some bug fixes in other areas of the game which delayed the boss level again, but also because we are never satisfied with what we have.

Before diving into details, let’s quickly take a look at what we are aiming for at Gamescom. This year, we are exhibiting in both the business and the entertainment area. As usual, we are part of the Austrian booth in the business area (hall 4.1 B51/C60; make sure to drop by for a strong Austrian coffee!), where we have our business meetings. On top of that we will be showing We Are Screwed! at the Indie Arena Booth (hall 10.2 021G-031G) in the entertainment area (make sure to drop by for awesome loot – no spoilers here!). There are tons of awesome games from indie developers there, check out their trailer:

The problem with polishing a game is that you always find something to tweak, change, or add. You think you can’t release anything before it is really, really polished. You are going to hate me for this, but I’m going to say it: There is some truth in that.

I still want my game to be perfect!

A developer about to release his/her first game right before turning 100 years old.

What we are actually talking about is getting priorities right, and that’s one of the hardest things in game development. You need to identify the very core of your game – because that is what really needs to shine, and what you really need to polish. Everything else is secondary.

As developers, we also need to be aware of this trade-off in overall production quality. Often, you would set yourself a goal for a target level of quality. This sometimes means you start with a certain art style, for instance, and then you are stuck with it. Having a half-baked game does not work, you have to pull through. And that’s exactly what produces a lot of delays – estimations are too optimistic, strange bugs appear, unforeseen events occur, and you miss deadlines.

The truth is, when you look at your game, you will always see things that look odd, wrong, broken, or just plain ugly. But that’s what you see – and it makes perfect sense. You have been developing the game for so long, you see and play it every day (if not, then something else is wrong), so of course you are aware of all those little glitches. The trick is to let others play the game. Just observe, and then ask yourself the following questions:

We’d love to hear more about your experiences and thoughts on the topic, both from the perspective of delopers and players. Leave a comment and tell us your story!

How to deal with user interface madness… or fail doing so. 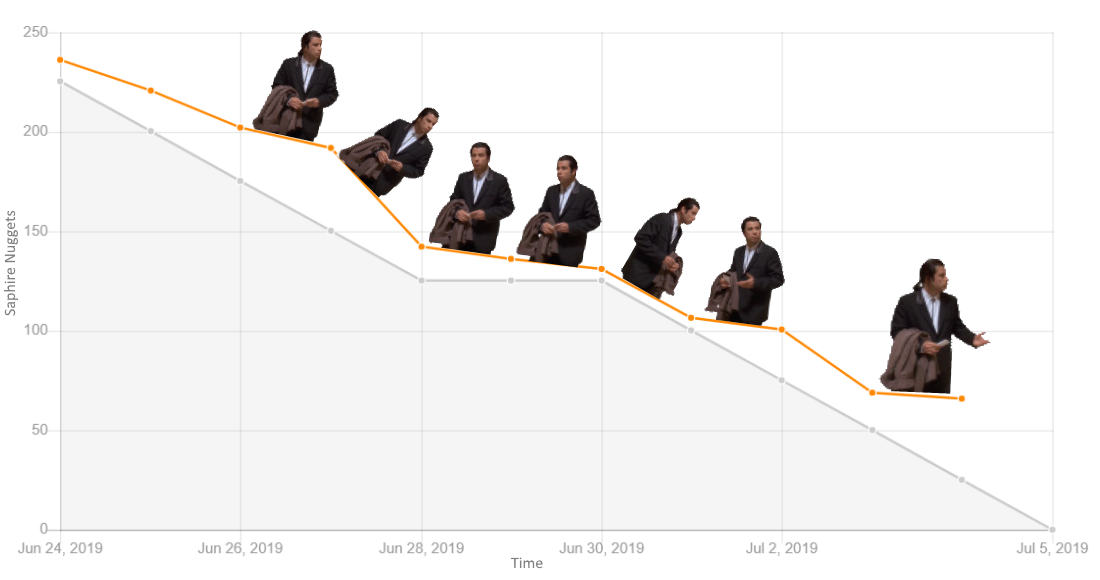 If you are new to this dev blog, and want to catch up, check out the previous episodes:

Can you hear the roaring sound of the alpha? No? Well, that’s because there is no sound in the game yet. However, gameplay-wise we are getting there!

We Are Screwed! features a unique split-screen view that shows you both the inside of your spaceship as well as what’s going on outside the ship. For a long time we had a rather polished inside scene right next to a more or less blocked out version of the outside/surroundings. In the last couple of days, things finally started to come together, check out this sneak peek:

We tried surviving the hottest days of the year (so far), and we partially succeeded. Could you all comment “I’m ok” so that I know for sure? We don’t have AC in the office, but luckily, a big metal fan was there to help out – as can be seen in last week’s stream recording:

As with every blog post, I wanted to choose a topic that we had to deal with during the sprint. First, I wasn’t sure what to pick, but at one of our super rare meetings at the coffee machine, Felix strongly confirmed that we must talk about…

In the last two blog posts I wrote a lot about planning and time estimations. Let’s now come to the most underestimated type of them all: User interfaces. When you start planning a project, you typically have a ballpark figure in mind when estimating all the tasks. In almost all our projects, user interface is typically the thing that does not get enough time in schedules.

Estimating the creation of user interfaces is the root of all evil.

Everyone on the team

But why is that? Let’s take a look at it step by step. Before starting the actual work on the UI, there is the situation were you have to block out a certain amount of time in your schedule. “Alright, let’s just assume 20 hours for this, it’s just this simple menu”, is something to be heard at that time. The dilemma is right there: You have no idea how the UI is going to look like, how the user interaction works in detail – hell, you don’t even have a mockup.

So someone on the team will start working on a mockup for it, eating up time from the original estimation. Most of the times, it needs a second iteration for getting this right. Next, maybe someone else starts implementing that mockup, and there comes the next issue: Mockups are never complete. They are always lacking something. Maybe there is this additional panel when you click on this button on the second subpanel of the third tab, or you realize that mockups are often just static images that do not show any animations, effects, fading, or timing.

Then, when you have the first version working in the game, you realize that it needs another iteration because it does not work as smoothly as expected, or some things are not clear to the player – and so you put yet more time into it. How much is now left of those 20 hours?

And so the new UI makes it into the actual game and is being tested for the first time. There is more feedback and more little details where improvements can be done.

It just takes so many iterations to get everything right.

It can help a lot to look at other games, and how they solved similar menus, HUDs, widgets, or UI panels. Sometimes you don’t have to reinvent the wheel. Also, make sure to playtest with fresh players who have not seen any of the previous iterations, otherwise they might be biased or used to what they were experiencing before.

Here is a magic rule of thumb for estimating UI tasks. First, think of all the steps and number of iterations it is probably going to take. Be aware of the fact that mockups are never complete, usability needs to be discussed once you created those mockups. Break down UI work into granular tasks, don’t assume any hours before thinking about specifics and details. Ask yourself about the level of quality and polish you are aiming for. Think about the workflow and the people needed to actually create it – sometimes it’s not just one person, but a lot of people involved as you have to deal with mockup creation, implementation, animations, and effects.

Then, together with the team, do a conservative estimation of the work to be done, and correct it as follows:

We would love to hear your thoughts, and discuss your experiences with creating or dealing with user interfaces – feel free to reach out, write a comment here, or hang out with us on our Discord.

And now, for the fun of it, here is a comparison of how the options screen evolved in We Are Screwed!

Oh wait, why is the “Apply Screen Settings” button highlighted in green here?! Oh no, we need another iteration – this needs to be fixed!