reK – ReplayKit Plugin for iOS enables you to integrate video recording functionality into your Unity iOS game within a matter of minutes.

Starting with version 1.4, reK also supports ReplayKit Live, and thus provides support for live streaming and broadcasting to services such as Mobcrush or Periscope. See below for more information on how to integrate this into your game.

Available on the Asset Store

If you have questions, do not hesitate to contact us directly: rek@rarebyte.com

There is also a Unity forum thread available.

reK – ReplayKit Plugin for iOS supports using the device’s camera to record video from the front camera. A small picture-in-picture view is added to your game if you selected this option.

Important: If you use the camera or microphone in your game, you will need to add the corresponding usage descriptions in your iOS build settings:

The easiest way to integrate reK – ReplayKit Plugin for iOS is as simple as that:

By default, the option Native iOS Overlay is already selected. The following options are available:

There is also preview of the recording controls widget available in the game view of Unity that reflects all parameter changes immediately.

A big advantage of the Native iOS Overlay is that the recording widget itself is not recorded to your video. 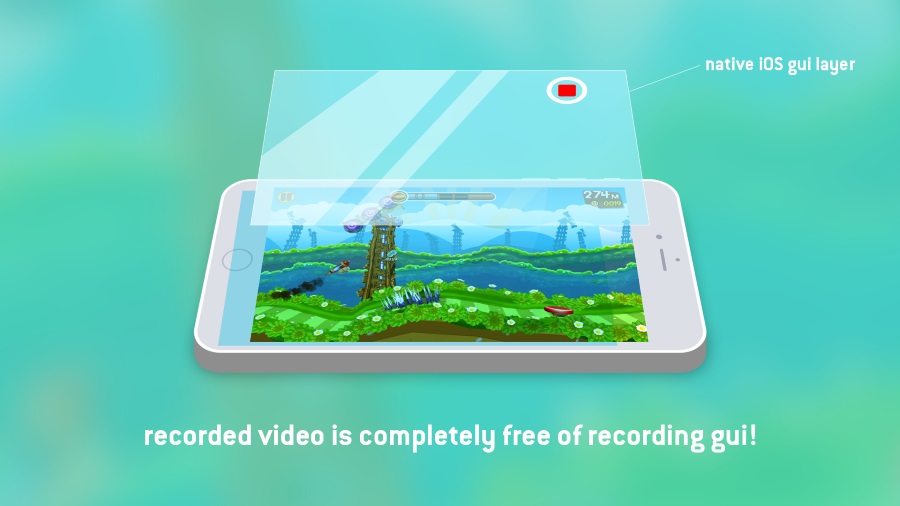 If you do not want to use the Native iOS Overlay method, just set the mode to Custom. The package includes examples for both Unity UI and NGUI (which is still used by a lot of developers). Additionally, we included an code-only example (using the legacy OnGUI system).

In some games it is very useful to record complete runs (e.g. in an endless runner) and provide players the option to either edit/share the video at the end of the run. In order to do that the recording can be started and stopped automatically via code:

You can also use actions to react to what’s happening with your recordings, e.g.:

The actions available are:

reK – ReplayKit Plugin for iOS depends on Apple’s ReplayKit framework that has the following requirements:

Important: If you need your game to run on older versions of iOS, you need to set the ReplayKit framework dependency to Optional in the Build Phases settings in your Xcode project, just like in this screenshot: 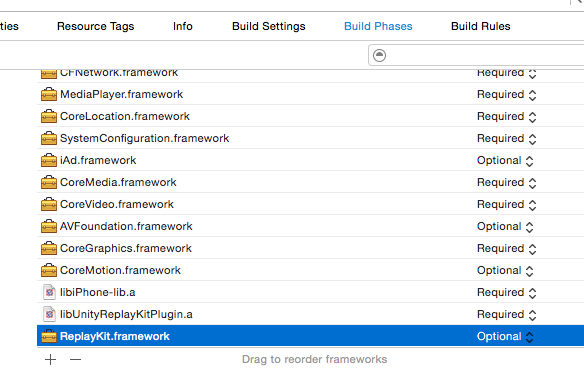 You can also check if ReplayKit is available by using the IsReplayKitAvailable property like this:

Using reK you can add live streaming/broadcasting support to your game. It supports all third party applications that provide a Broadcast UI extension. In the game, players would have to perform these tasks to start a broadcast:

Some services also support a pause/resume functionality which can also be accessed via reK.

Integration reK live streaming into your game is very easy. Take a look at the example scene UnityReplayKitExampleBroadcasting. All you have to do is drag the unity_replaykit prefab into your scene, set it to Custom (unless you also want the native recording UI available as described above).

To let the user select a broadcasting service, just call the following method via code or wire up a button with:

To stop the broadcast, just call:

There are some callbacks from the plugin that are quite useful:

You can easily add your custom code to those actions like this: